If you look up “The Cure” on the internet, amazingly you first find newsy reports about an English rock band formed in West Sussex in 1976.  The Cure will, in fact, be touring the U.S. this summer at the time we will be touring on Route 66.

Something like fourteen million people living in the United States currently have or have had cancer.  Those folks want tickets to The Cure.  Add to that the number of family members and friends who also want a seat.  The Cure is touring.  It’s coming.  Please come.

Waiting not-so-patiently is our friend Patty.   Tapping feet impatiently alongside her are all of her friends.  And family.  While we wait, this gal has entertained us with cheerful Facebook posts and video taped songs she sings in the hallways at Moffitt Cancer Center in Tampa.  Her family has raised over $100,000 for this regional cancer center in the past year alone at their Callaghan Tire Charity Pro-Am Golf Tournament in its eleventh year.

Today’s entertainment from Patty was a nod to the Wizard of Oz’s “If I only had a brain.”  Her voice still affected but not in any way diminished by the radiation she recently had for twenty seven days straight.  The radiation targeted the thyroid cancer secondary to her pancreatic.  For twenty seven days in a row she was bolted to a table by this mask which she later asked a friend to paint.  She says she may be donating this mask to Moffitt to “calm the fears of others.” 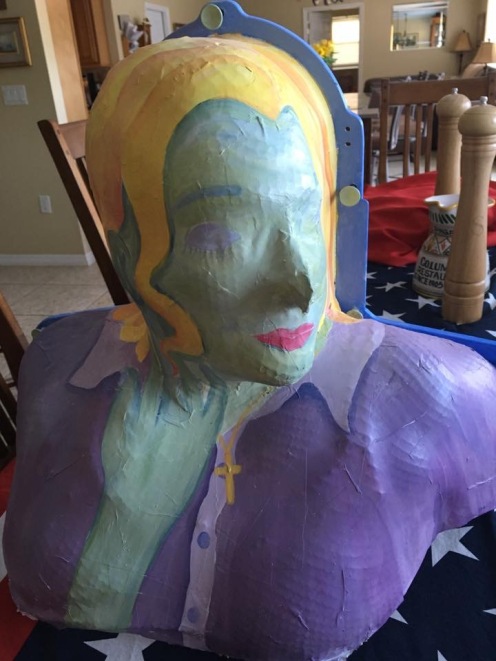 So we begin our journey on the yellow brick road.  Our heroine is no tin man.  Her heart’s in place and filled with the love she shares for all who would also benefit.

Oh Great Ticketmaster in the sky, please get her a VIP seat complete with a stage pass?

Because of the wonderful things she does.