8:00am wake up in Chicago.  Showered and ship shape we headed over to Lou Mitchell’s restaurant for what had been touted to be a REAL deal restaurant near the start of the Mother Road.  Lou Mitchell’s delivered.  Breakfast was great.

KiKi, Yvette and “the doughnut lady” pulled out all the stops.  Julie’s son, Jordan, and Patty’s friend Jesse (actually the daughter of a childhood friend of Patty’s) met us for breakfast.  We were greeted at the door by The Doughnut Lady who profers doughnuts all day by the tongful.  Milkduds are handed out immediately afterwards…and then you may be seated.  The doughnut lady wears Chicago Cubs earrings. We have deep feelings for her obviously.  The doughnuts were AMAZING.

Yvette and Kiki were our servers, but now are friends.  They loved our story and shared in our enthusiasm.  And trust me, Yvette is a HOOT.  Yvette told us she “just loves ELLEN!”   Her hands were on her hips and her pen was tucked over an ear.  Her body language is sass for miles.  You would love her Ellen.  She wants to go on the your show, and she wants to play a game with you because “I’m a super duper competitive person, but in a nice way!” 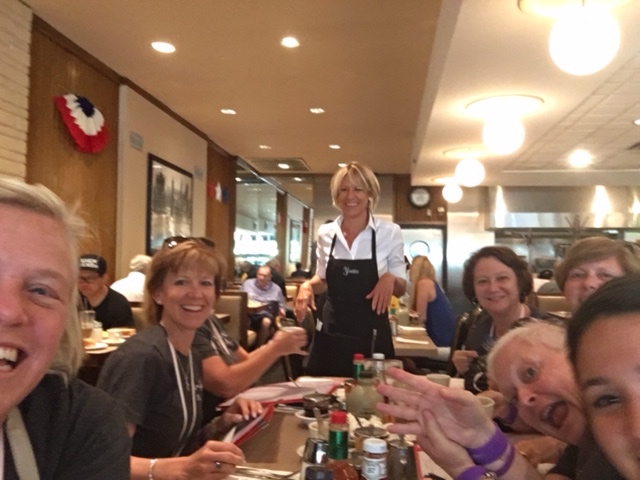 Jane chatted with some folks at a table nearby who asked about our matching shirts.  Matching shirts is, apparently, the biggest icebreaker you can have in this life.  The folks were a couple from Ireland, and of course, became our friends.  They too will be tackling Route 66 but start their trip tomorrow…oh, and they gave us a donation of $50 within minutes of meeting us because they thought we must have a cause…and the wife was a cancer survivor…and that’s just how it’s been.

Next stop.  The Chicago BEAN.  It’s called the Cloud Gate but someone needs to tell the guy who named it that it’s just a beautiful jelly bean.  There should be more sculptures in the world shaped like candy.

Continuing on the topic of candy, for some reason the milkduds we’d had earlier at Lou Mitchell’s struck us later as hilariously funny as we drove our first miles, and now we can’t recycle our funny joke often enough, “DUUUUUUUDE, want a DUD?”  Say that forty or fifty times and I guarantee it’ll become hilarious even to you!

We drove first to Joliet, Illinois and stopped at the Joliet Area Historical Museum because Debyjo Ericksen was kind enough to reach out to us on social media, and quite frankly, we couldn’t believe it.  She wanted to meet US.  She wanted to give US a tour.  Later she shared a quote from her father that has stayed with her, “Travel is the only thing you buy in life that makes you richer.”

You may know that Joliet is the home of two prisons.  And famously the Blues Brothers got their “start” here.  Debyjo is awfully nice too.

We clambered back in the car to begin again…with a quick stop at the Gemini Giant who lives in Wilmington, IL.  Stand in line to get a picture with a green guy with a helmet?  Sure. 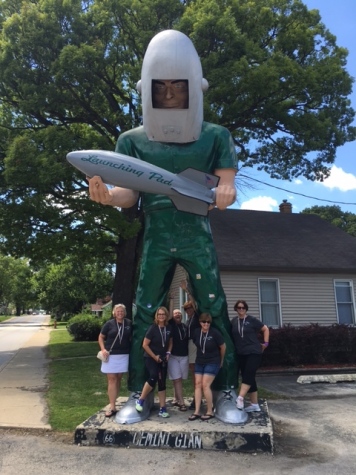 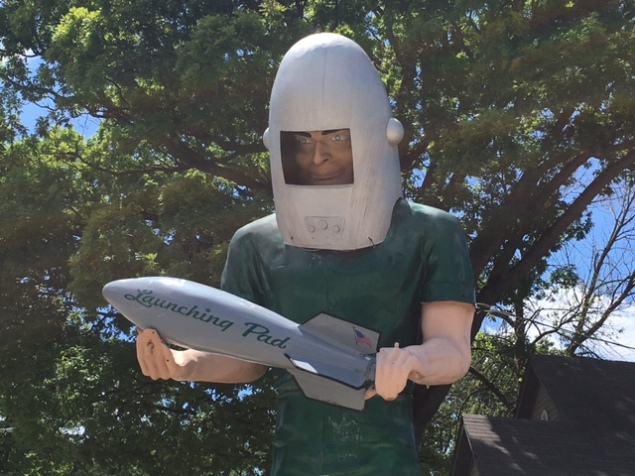 Next stop Pontiac, Illinois.  This home of the Route 66 Association of Illinois Hall of Fame and Museum is where we met another new friend, Ellie Alexander, the Director of Tourism for Pontiac Illinois, and a fun chick in her own right. 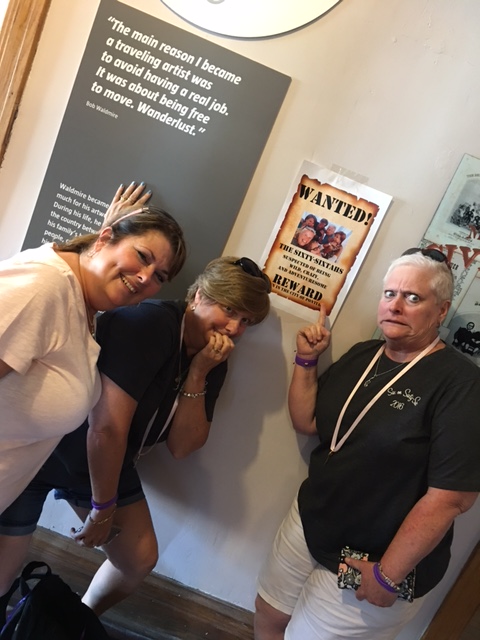 Ellie sent us off on our way two hours later having given us gifts, lunch and a lovely time with the town’s mayor.   Mayor Bob joined us and chatted about Route 66 lore, life in Illinois, and about Patty’s health battle with a knowing twinkle in his eye… he has two sisters of his own who are battling cancer.

It may be obvious to most, but usually a Mayor is the best behaved person in every photo.  Here Mayor Bob gives Patty two thumbs up.  And we give Pontiac five stars out of five!  We like to think we left a mark in Pontiac…even if only on the chalkboard..

On the road again, and with an embarrassingly low number of miles under our belts, and with those same belts still tight from lunch, we decided a stop at the Cozy Dog Drive-In in Springfield.  It just made sense.  Food to go.

Because how can you pass up the ACTUAL place where corndogs originated…well, they call ’em cozy dogs…but here is the poster that gives definitive evidence that the first corn dog was birthed in Springfield, Illinois

Off to THE ARCH in St. Louis.  And somehow now we thought we were going to be late!  We had an 8:30 tour, all went well, and we were soon looking from the windows at the top of the arch! 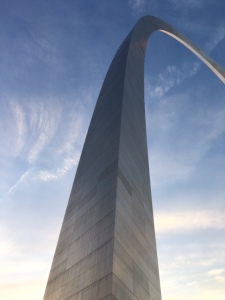 And we dragged ourselves to our hotel after a long long day…only to find some more trail magic.  Somehow the Hyatt in St. Louis had heard about us… 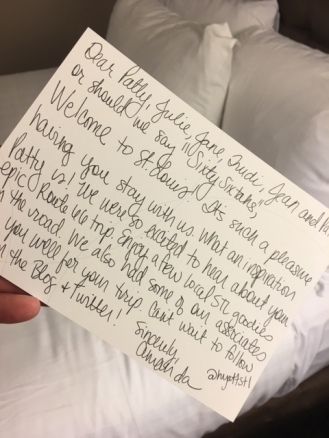 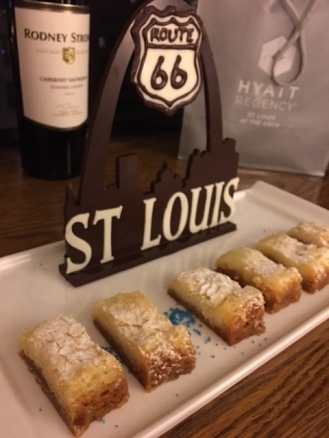 All we can do is raise a glass and thank you each and every one.  Patty called the front desk to thank everyone, and the staff finally connected her with someone who may have been instrumental.  His life was touched by cancer recently too…

We had a lovely party in Patty’s room with red wine and chocolate, and got to know her friend Cathy Finch who drove in from Evansville, Indiana to spend some time with us…and brought her darling parents who will be celebrating their 70th wedding anniversary this year.

Tomorrow we leave Missouri and hit part of Kansas on our way to Oklahoma. 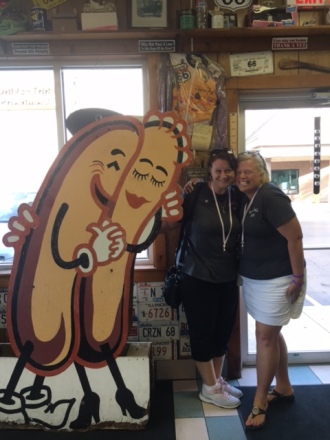 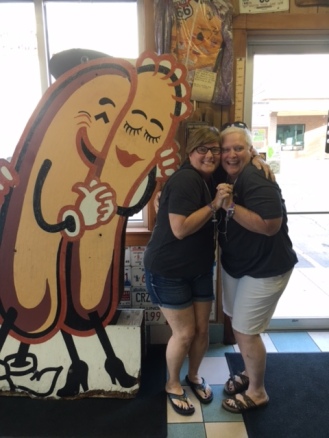 And an update on Sparky:  Patty T has made some additions, and she’s turning into a SWEET RIDE! 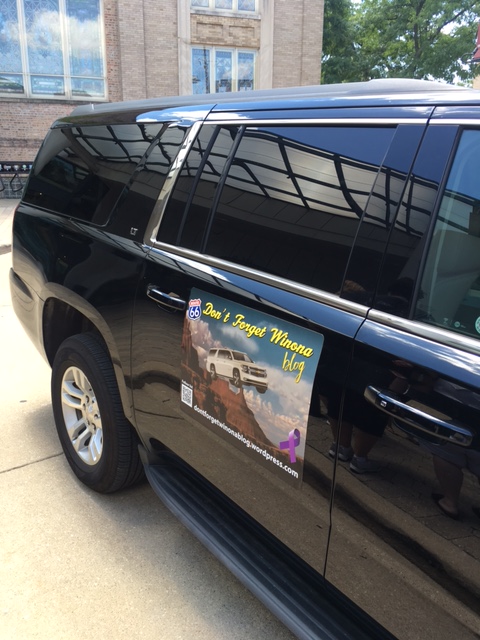 We sang along to KC and the Sunshine Band KC today…

“Girl, to be with you is my favorite thing, yeah
And I can’t wait ’til I see you again, yeah, yeah

Patty said today:  “I just tell everyone at the hospital that they must have the wrong patient chart.  I’m not the girl that has that disease.  I’m happy to have the treatments, but some old man is walking around, and he’s the guy that has the disease.”