Well, it’s not so much that we FORGOT Winona today but that we just couldn’t find Winona.  No seriously.  Here is the thing.  We saw the sign.  We got off to take an awesome group picture of ourselves with our sporty new selfie stick, and we never found the town.  Not kidding.  A group of women in a car with maps and gps could not find a town.  I know what you’re thinking.  Don’t say it.  I mean, we found the Grand Canyon later.  So just don’t say it.  Also, is it too late to order a Route 66 for Dummies book?  I mean for Smarties.  Not Dummies.  In our defense one of our travelogue books actually says, “Winona forgot Winona.”  It’s just sort of not really there.

Before that we did pass through Winslow, AZ, and we did sing the Eagles hit, “Take it easy”  because we’ve been eager to do it for about two months…”Well I’m standing on a corner in Winslow, Arizona, and such a fine sight to see….”  And we probably did see it.  Pretty sure.

and someone behind us actually honked at us there at a stop sign, can you believe it?  So we yelled advice through our closed windows, “Dig deep and get some Trudi!”  “Get your Trudi on!” “Trudi is our jam”    “Keep calm and Trudi on.”  We’re spreading kindness and we mean business.  And we’re armed with Trudi.

We also passed some bikers who were biking uphill laden with heavy packs.  We cheered for them as we passed, and they laughed and raised their fists in union with us!

The day had started at the WIGWAM after a quick coffee run  For you exercise enthusiasts, that’s when the rest of us get coffee and DO NOT run. 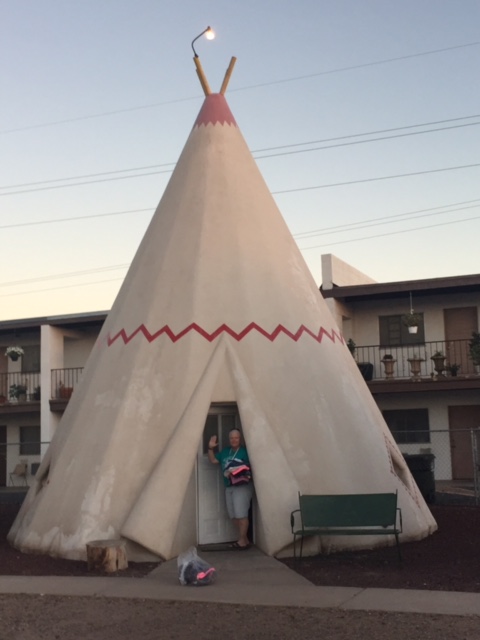 Trudi and I picked up coffee for the gang and kept with the Trudi Tradition;  we offered up coffee with a morning greeting…”Good M.” was on the styrofoam cups we delivered to the others’ wigwams.

On my way back to my wigwam (that feels weird to say) I accidentally broke all wigwam etiquette in a single move…I entered the wigwam next door accidentally.  I jumped back out of there more quickly than most have seen me move…only to encounter a woman sitting in an open car just behind me laughing deeply.  She’d seen me going toward her wigwam but thought it would be funnier to see me do it than to stop me.  Her husband was inside.  We became fast friends as we laughed and laughed…she and her husband and their two friends drove away later with blog business cards in their hands and sent well-wishes to Patty as well.

Sparky was packed up and we were off to breakfast…

Joe & Aggie’s Cafe is truly a slice of Holbrook pie with a dollop of cuties.  Kimberly runs the joint, and Tammy helps.  We were in luck, Tammy’s granddaughter and grand niece were there working too.  Little Bailey (3) trotted along behind her cousin Arianna (12) as they waited tables .  If you need cream, Little Bailey is the girl to know…meanwhile Kimberly runs the kitchen…

Kimberly served up a mean Chorizo and Eggs w/ tortillas.  And the huevos rancheros were offered with green or red salsa.  The best refried beans I’ve ever had.  What up, Kimberly?  You’re amazing.

Kimberly runs the entire cafe actually.  Her grandparents were early townspeople in Holbrook and opened the cafe, and she has kept up the tradition.  Their tradition has inspired many.  John Lasseter of PIXAR fame spent some time in Holbrook as he conceived his animated Pixar movie, Cars.  Set on Route 66, this movie was nominated for an Academy Award for best animated feature film of the year in 2007.   His cartoon thank you notes for the help he received from the Joe and Aggie Cafe family are proudly displayed on the wall in the front room. 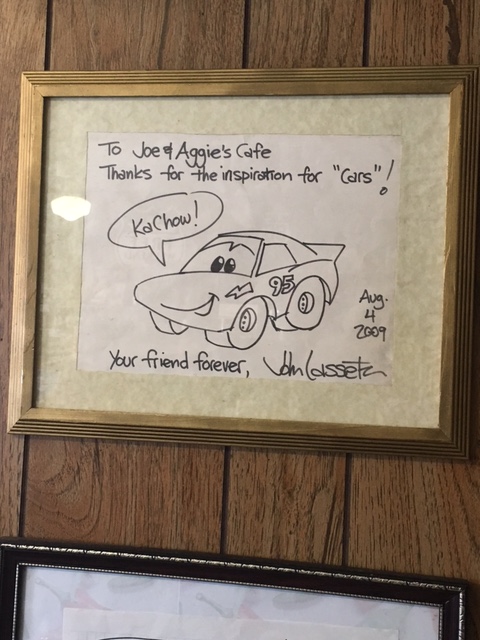 We hit the road (again) and wound our way through Kaibab National Forest and also past Mt. Humphrey remarking in the changes of the terrain.

Full Disclosure.  There was a Hobby Lobby run the other day in between all of the convenience store and gas fill up stops. 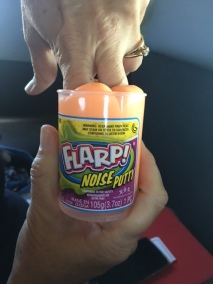 Certain Sixtahs not-to-be-named purchased  Flarp Noise Putty.  Initially we all made fun of the purchaser and thought she’d bought silly putty or play-doh for a bunch of fifty year old women.  We’ve since eaten crow.  This stuff is perfect for boredom-busting especially on long car trips.  We have video proof (taken in the Suburban) that this stuff isn’t just for kids.  We regret to inform that as we have jobs, and children and people in our lives who believe we are responsible adults, we will not be able to share the video evidence.  What happens in Sparky actually DOES sometimes stay in Sparky.

We made a stop at Cameron, AZ at the trading post and met up with Ellen Degeneres and Melissa McCarthy because that is how we roll. 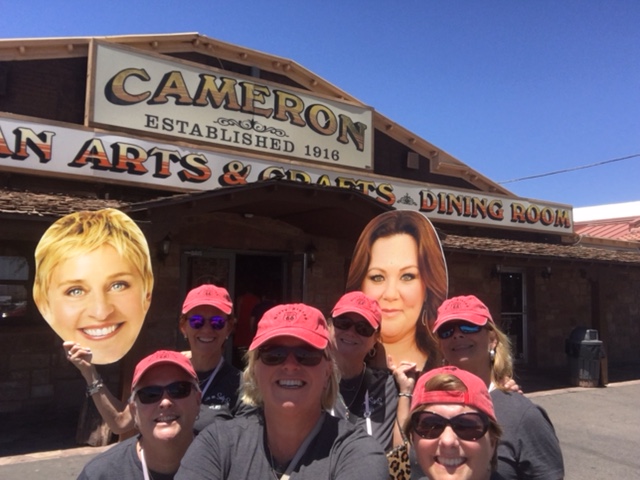 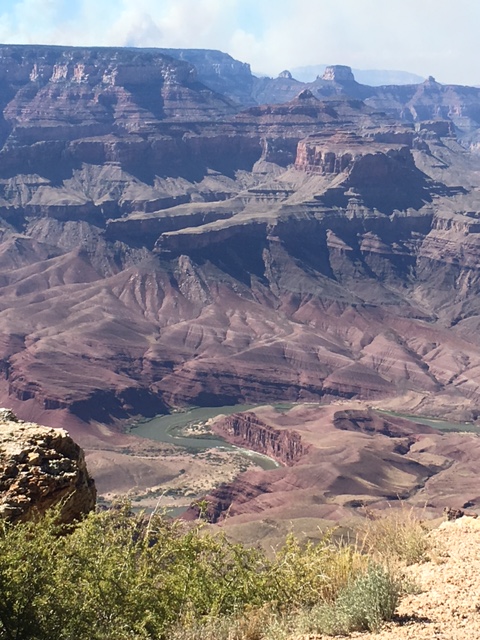 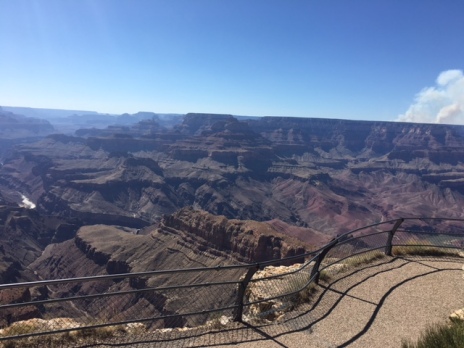 The Canyon is GRAND.  Our lives are GRAND.  And people are GRAND.

We can thank Theodore Roosevelt for naming the Grand Canyon a national landmark.

We can thank ourselves for taking our own lives and making them Grand.

Jean did a lot of driving today, and we encountered a number of roundabouts.  Those are those circles that have roads jutting off in different directions.  Why not do what Jean does…she enters the roundabouts, and we go around a full spin before making our final turn out of the roundabout.  Make life Grand.

We met a very nice young man named Brent who took this wonderful picture for us,

and he listened to our story and genuinely seemed to enjoy his time talking to Patty and to all of us.  Brent was a young man of twenty-eight traveling from one side of the country to the other with his parents logging nine hours of driving a day.  What a nice family that took the time to talk to all of us, and then later while Patty sat on the bench with a few of us, they came over to talk some more.  Brent’s dad said Patty is living his nightmare, he says he LOVES LIFE.  And he thinks Patty is doing it in style.  Living every day.  Really LIVING it.  We parted with a picture and many hugs. 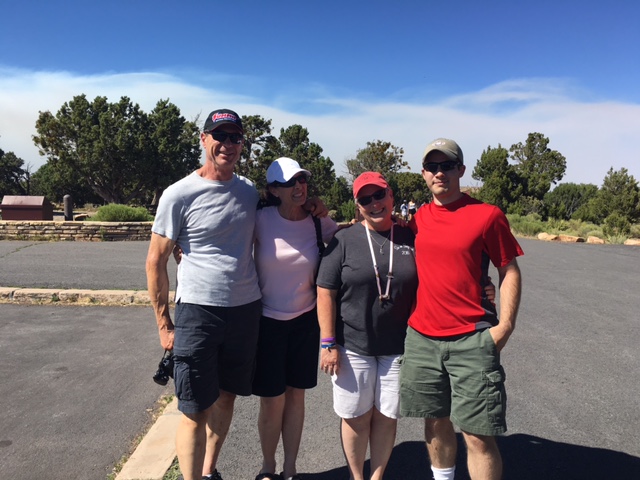 Brent’s mom loved that Patty has a strong support team in her family and in us.. ..Patty left her mark on this family, you could tell.

As we parted she told him, “Brent, these hugs from strangers only make me stronger.”

Jane calls her Kid.  Miracle.  Here is our Miracle.

“For the miracle, a true blue spectacle,

The miracle is you.” – Barry Manilow, Marty, Panzer.

Barry White..you’re my first my last my everything.