We put Memphis on the back burner when Patty V asked us if we could stay in town instead and attend the RELAY FOR LIFE event to benefit the American Cancer Society.  It was planned for three days after her scheduled chemo, and Patty had been asked to give the opening remarks.

“Our first RELAY was after Jane’s diagnosis in 2008, and I had my diagnosis too, right?”  This was Patty trying to remember the year she first attended a RELAY FOR LIFE event nine years ago.  Jane was in treatment for breast cancer.  Patty had a new breast cancer diagnosis.

Auntie Em, as I call Patty’s Aunt Margie, and I took Patty to chemo on Tuesday this week.    It was what we call a “rough” chemo day.  Patty roughed it out.  Toughed it out.

Now it was Friday, and we pitched Patti T’s tent proudly at the Sixty Sixtah Team Sign.  Patti brought food and chairs and a reclining lounge chair for our Patty.  We had beads in every color…purple for pancreatic awareness, light blue for prostate…  (Patti and I lost a friend to prostate cancer this month…)

Patty was called up to the stage…

She opened with jokes about Pancreatic Cancer.  Of course.

There was laughter (to chase away the cancer cells), and at times there was also profound silence as her words were digested by the attentive crowd.  She spoke of her (almost) unbelievable story of survival. 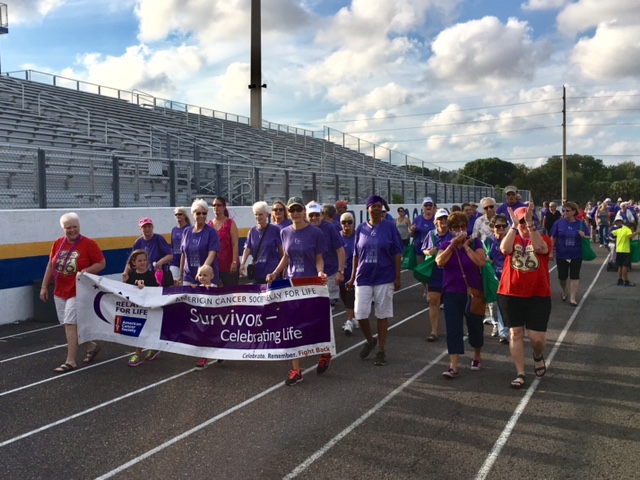 The event organizers called the cancer survivors over to do a Survivor Lap.

Patty helped to carry the banner as did a tiny little girl named Megan.  She is in the center of the banner in the picture above…and in the matted photo to the right that Jane is signing…

Later on I met the incredible men below who are, from left to right, Ralph, Rafael, and Willie.  They are members of a family that has been “wiped out” by cancer.  Ralph drew my attention after Patty’s speech when he leapt up from his chair and walked up to hug her.  I knew I had to meet him.  I found him later with Rafael (center) who had a walker and a very strong handshake.  Rafael has lost two brothers and a nephew to cancer.  Rafael described himself as the lucky member of the family who ONLY had Prostate Cancer.

Ralph has had anal/rectal and hodgkins lymphoma.  Cancer “has really kicked me in the butt,” he said and then paused for laughter.  He was a professional dancer who worked with Debby Allen and later with the Houston Ballet.

I watched these wonderful men walk  to every tent introducing themselves and “saying something” to everyone.  Rafael loves RELAY FOR LIFE events and has attended them for years.  He has an intensity and a spirit that reminds me a lot of Patty.   Obviously they look alike, so there’s that… and she jokes that she’s lucky too…

He began to tell me how the women in the family have faced cancer as well.  Willie helped him name them.  He needed two hands to count them.

There was a lovely speech later in the night by an eighteen year old girl, Candace Powell, who fought for her life against a very tough childhood cancer and was given a 5% chance of survival.  She’ll be organizing a 5K run to be held in August in Sarasota, Florida to raise money for pediatric cancer research.  It’s the Candy’s Circus Run.

And even later, when it was dark, the lights in the stadium were turned off for the Luminary Walk.  From the podium we were asked to walk a lap in silence remembering those who are battling or those who have lost their battles with cancer.  The entire track was illuminated by luminaries  with messages, names, pictures… 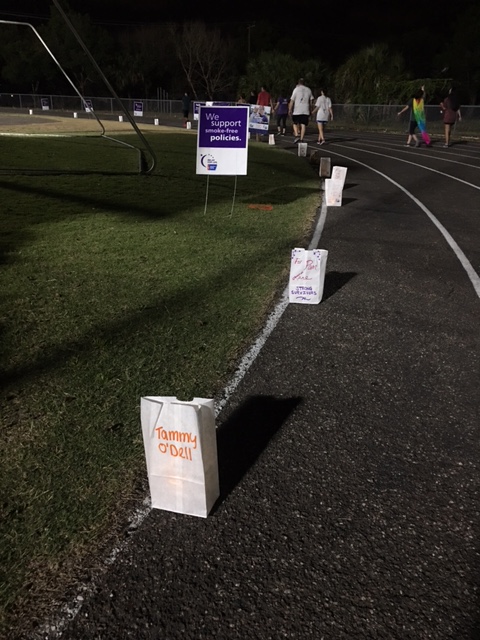 I walked next to Jean and knew that she must be crying.  I was too.

Patty spoke to many that night, and many came to find her and to hug her and to share stories.  She snuggled under a blanket in her recliner chair, and we checked in between activities.

It was a Memphis-skipping or Memphis-postponing worthy night.  We hugged and walked to our cars.  Patti T called me from her car to ask me to look up at the moon.  It was beautiful. 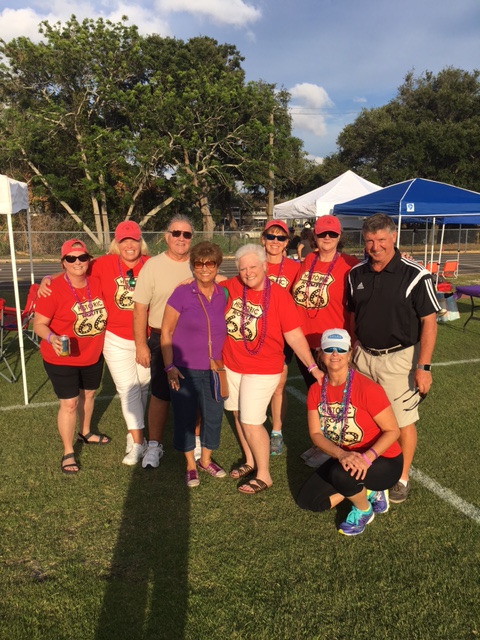 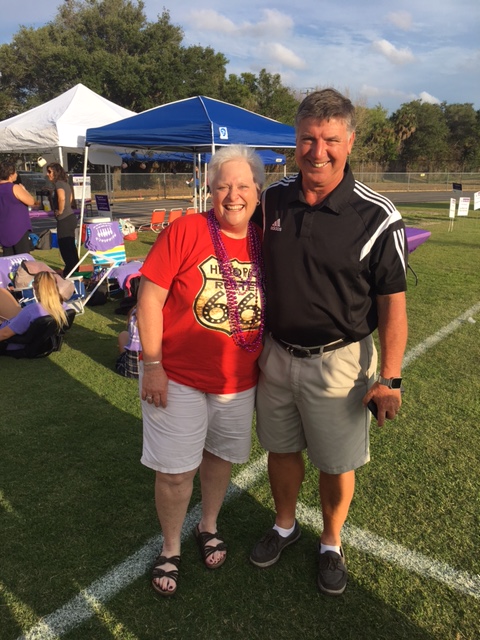 And special thanks to Trudi’s sister, Lori, for pix from  NINE YEARS AGO: (when the RELAY FOR LIFE team was called the “Bosom Buddies” for obvious reasons).  Their t-shirt “catch” phrase was “CANCER:  Catch it Early!” 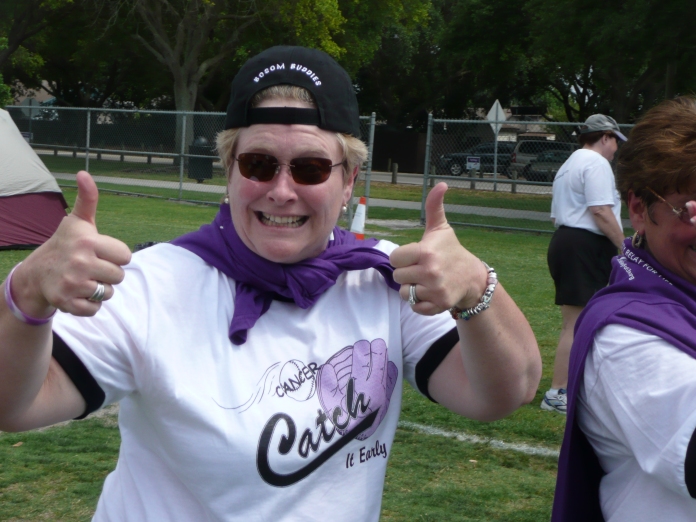 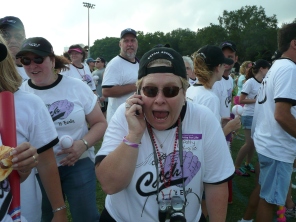 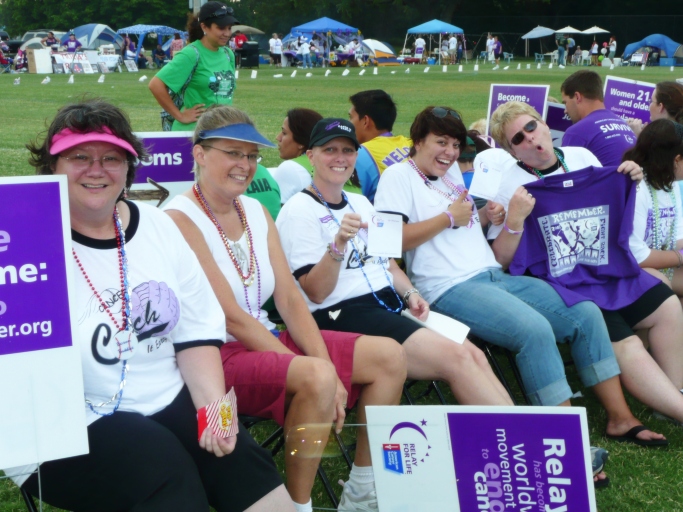 “If you’re having a bad day think of me, and maybe your day will be a little bit brighter and your load a little bit lighter.”

“Look at me.  You’d never know the battles I’ve been through.  The rough days.  The challenges of hearing the news of a diagnosis that can beat your spirit.”

“Be patient with each other.”

“Now take a piece of me and go out there and make a difference.”

“I’m sending love, kindness and prayers…to every survivor, to every caregiver and to those who have lost someone to this disease.  You’re not alone.”

“Life can be lumpy, and we need someone else to smooth out those lumps and to be a friend and to have a strong shoulder.”

You’re right Patty.  Life can be lumpy.  And we’re here, and we have strong shoulders.

If you’d like to help the American Cancer Society please contact them about a RELAY event near you.

And special thanks to Tess Chawi and her volunteer team for their wonderful work on The Bradenton & The Beaches RELAY.  Tess and her family are celebrating her son Chris’s 10th cancer free year!