The final hours of packing for a ten day trip are always hectic.  Of course we were “up-sided” about the trip, but work still had to get done.  The six of us have various jobs and homes and families and spouses and pets to whip into shape.  And suitcases don’t pack themselves…eight sets of matching t-shirts along with straw hats and Elvis wigs, etc..it aint easy I tell ya.  But it all came together.  And Auntie Em and Mama B picked us all up this morning and delivered us to the airport.

We met folks along the way like the curbside check-in guy for Southwest Airlines who laughed and chatted, and I’m guessing his daughter will be wearing a Team Patty Bracelet tomorrow to school.  A gal wearing a “BLOCK OUT CANCER” shirt

gave us York Peppermint Patties after we spoke with her for a while.  She travels with a group of women and envied us our girls trip.

Before long it was time to board our Southwest flight.  Patty, Jean and Patti had checked in early and had high priority for boarding so they went ahead to secure seats for us all together!!  Gotta love Southwest, right?  Trudi spoke to the flight attendant, Stan, and he offered her the phone up at the front of the plane so she could make an announcement to the entire plane,   She sounded off with “Yo! DOG!…Yo!  DOG!” and Patty from her seat midway back on the plane yelled, “Bird!  Bird!”  Those gals have been calling each other those names for years.  And Trudi followed up with “A shout out to Patty Virgilio and TEAM PATTY heading out on a trip to Chicago and down the Mississippi River!”    And when I entered the plane a few minutes later I was handed the phone for another plane-wide announcement, “Attention!  Attention,” I said, “My friend Patty Virgilio has just reached her FIVE YEAR SURVIVAL date with Pancreatic Cancer.  I’m so proud of her, go patty!”  And Jane, at my side, announced, “And not only that, but she’s a survivor of breast and thyroid cancer too!  She’s a miracle, and we love to celebrate her!”

People clapped, and when Jane and I sat down the young man sitting behind Patty told us that he was a two year survivor of thyroid cancer.

Up in the front of the plane Stan, the flight attendant, was probably very happy to have control of his microphone again.  He informed the plane that some minor maintenance was occurring and that our departure would not be delayed by much.  He then added, “Patty, do you need any maintenance done?  We can ask the guy if you need him?”  And Patty proclaimed loudly that indeed she did, “Yep.  I need a new pancreas!”  Folks around us laughed!

We settled in for a short two hour flight up to Chicago.  Periodically the flight attendants stopped by to chat.  Leslie bought drinks for Jean, Patti and Jane.  Christopher brought Patty official “wings,” so basically she’s a pilot now and the proud owner of awesome luggage tags.

Eventually Patty fell asleep, and Trudi and I tackled a crossword puzzle with only a minor amount of flipping to the final page of the magazine for a couple of hints on the solution…

I can’t share whose idea it was..but eventually the five of us decided that we should “decorate” Patty as she slept.  Remember that game from the 1970’s called “Operation?”  That’s right…the one where you had to carefully remove vital organs from the “patient” without having the buzzer (a red lightbulb at his nose) go off?  Well this game was REVERSE Operation.  We carefully placed things ON Patty without her noticing.

And then we shared our idea with the flight attendants when they came by…I guess I wondered what they must have thought of us, but when they returned with other items we could use (sweet’-n-low packets, coffee stirrers)  I realized that they’re just fun people like the rest of us.  Leslie, Stan and Christopher.  Based in Atlanta.  Just great peeps making life more fun for people…for people they lift up in the sky…for people they lift up.

And Patty was a good sport as usual when she awoke.  That note says, “Wake me up for snacks” by the way.

“You can’t close your eyes around here.”  She said.  And she’s definitely right.

We took a selfie with Stan, Leslie and Christopher and laughed and gave them TEAM PATTY bracelets.  We asked them to follow the blog…

Our arrival in Chicago was uneventful, but what wasn’t uneventful was the arrival of our sweet ride.

Sparky II, or “Deuce” as we call her.  She’s a gold Ford Expedition.  A thing of beauty.

We drove off in style toward Highland Park, IL which was a former hometown of Jane and Patty’s…it’s just north of Chicago so a slight departure from the Mississippi River which we will parallel tomorrow….and in the days to come… 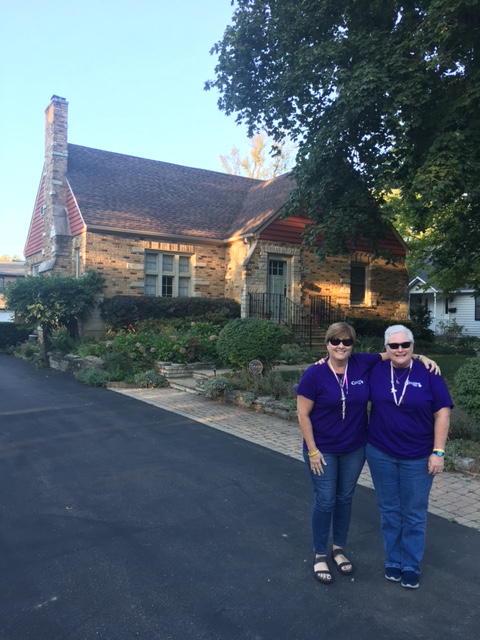 We passed St. James Church where Mama B and Papa D were married and also Wayne Thomas Elementary where the girls went to school, and soon we headed to a hearty Italian dinner at a neighborhood restaurant to meet up with extended family that still lives in the area:

Susie and Freddie – Mama B’s cousin and her husband

Tony and Barbara – Mama B’s cousin  and his wife and their daughter Audrey.

…a lovely meal provided by just really really good folks.  Jane and Patty shared stories about how they used to go over to Susie’s house for haircuts as kids.

We drove away with full tummies and memories of a lovely town of charming well-manicured lawns and hydrangea bushes surrounding enchanting homes with peaked roofs.  Patty says that the first snow every winter was absolutely beautiful in Highland Park every year.

We had a three hour drive south to Muscatine, Iowa to round off the night.  When we climbed into Sparky II I logged on to begin writing and found that Christopher, our flight attendant on Southwest Airlines, had commented on yesterday’s blog post.

“Ladies, what a joy it was to serve you

on your flight this afternoon.

You all be blessed and be safe on your journey.

Father Tom said it best so I will leave it alone.”

And what a joy it is to find people who want to spread kindness above and beyond the call of duty, thank you so much Christopher…you lift us up.

And yes, Ellen and Melissa are along for the ride… 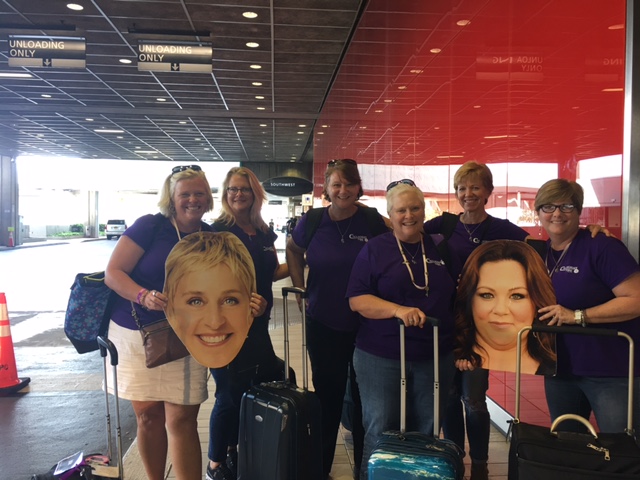