I awoke with a migraine and was unable to lift my head from the pillow.  Team Winona kicked into gear. Trudi, my roomie, was as nice as ever and did all she could to help, but the gals had to postpone our departure; Patti and Jean scampered off for Starbucks treats for all.  My migraine medicine kicked in slowly but not before Patty came to my bedside to rub my temples with her cool smooth hands. I thought of all the times I have rubbed her head at chemo appointments, and I began to fight tears.  Maybe I had once or twice made her feel as good as she was making me feel?   My headache didn’t stand a chance…

Janey did her part too once she and I were firmly in the back row of  Sparky II.   She broke out the snacks and asked “Need some popcorn for your head?”  She’s a good friend.  I grabbed a handful!

I had delayed our departure from the hotel later than expected, but finally we started our drive toward St. Louis with a planned stop in Hannibal, Missouri the home of Samuel Clemens (Mark Twain).

Trudi had readied a postcard for Ellen Degeneres, and we planned to mail it along the way:

(That’s a picture of the Mussel Man Statue in Muscatine with his mussel collecting tools.).

In 4.5 miles we decided we should stop at a pumpkin stand for a photo op with a giant watermelon sign. 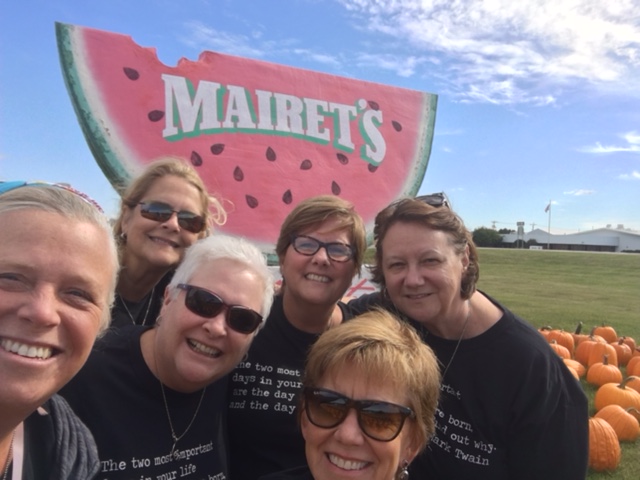 Back on the road in Sparky II, Patti and Patty saw an auspicious sign:  “Lovers Leap Bridge.”  We HAD to investigate. 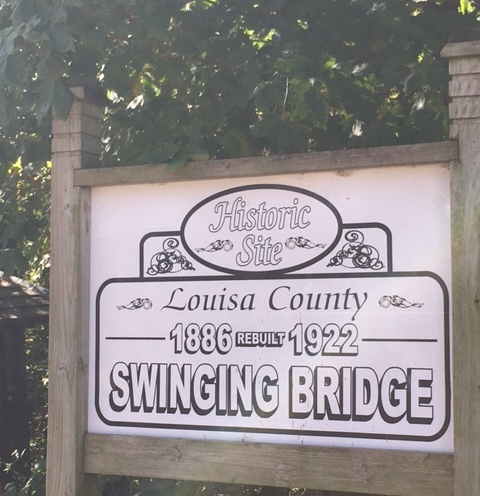 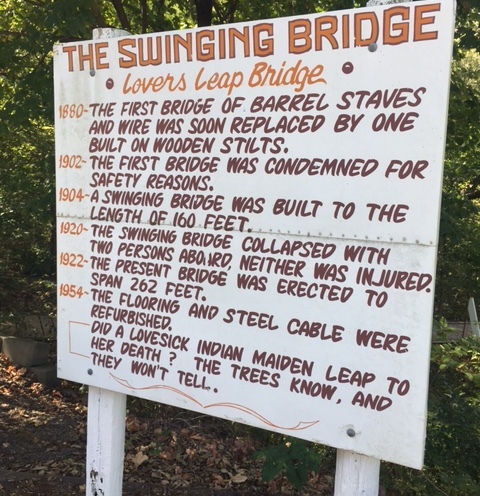 Tucked just off of the two lane highway was a hanging bridge that swayed unmercifully…but we rose to the challenge led by our leader Patty V!  A few of us are afraid of heights…you may be able to guess which ones from the video…

and then we needed gas and headed off to a convenience store for a quick restock of treats and bottled waters too!

One of our favorite pastimes is leaving teammates high and dry.  We love dropping our dear friends off at a location and then relocating the car while they are inside of stores for a quick purchase or a potty break.  Today was no different.  Here we are after we “hid” our car from Patti T…

It had now been two hours since we’d left the hotel.  We were still in Muscatine County, and we were probably averaging eight miles per hour.  It was time to ACTUALLY drive to Hannibal which still was another three hours away…or MORE the way we drive.

We felt the need to point out our matching shirts to the gal at the Mark Twain Museum Admission Office, and she promptly gave us a group rate!  The gal at the gift shop wasn’t quite as excited when we showed her; she admitted, “I’m not really much of a fan myself…”  Mark Twain would have appreciated the humor there I think.

The Mark Twain Boyhood Home and Museum really is worth the trip.  We learned so much about his humble childhood and remarkable life.  Scholars have said that “he wrote as if there had been no literature before him” and maybe they meant that his style was new.  He wrote as though he were sitting on a front porch with a tall glass of lemonade nearby and chatting with an old friend.  In speaking of his childhood he said

“Well it was a beautiful life, a lovely life.  There was no crime, merely little things like pillaging orchard and watermelon patches and breaking the Sabbath–we didn’t break the Sabbath often–once a week, perhaps”

Of being a writer he said,

“Get your facts first, then you can distort ’em as much as you please.”

If you’re a fan of Mark Twain, or even if you just have read The Adventures of Tom Sawyer you may be impressed with this next picture.  This is the actual location of that famous white picket fence… 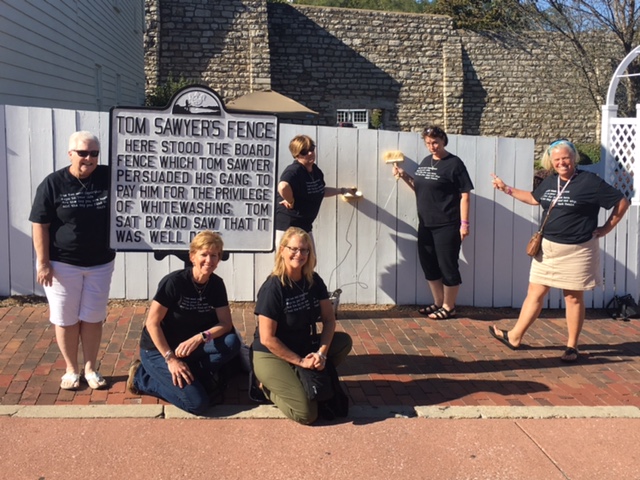 It may surprise you to learn that we did finally make it to St. Louis tonight..

We checked in to our hotel and were helped by a really fun gal named Emequa.  When she saw that we were from Bradenton, Florida she told us that her husband is from Arcadia.  Thrilled that she’d married one of our locals Patty asked, “Do you like him?”  and we laughed.  We laughed all the more when Emequa responded, “He’s okay!”

The sixtahs finished the night with game night up in Room Callaghan!  Jean won. 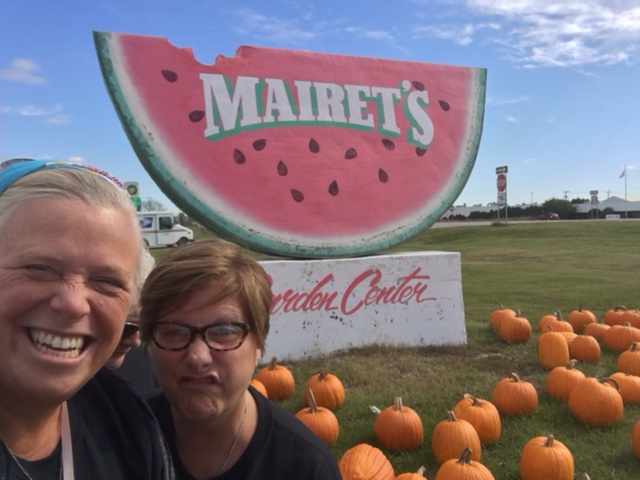 Here I am with The Manatee County Fair Queen.

and here are some more thoughts from Mark Twain: 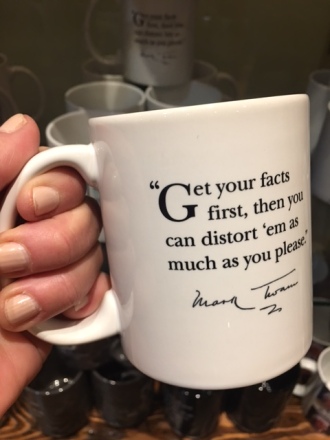 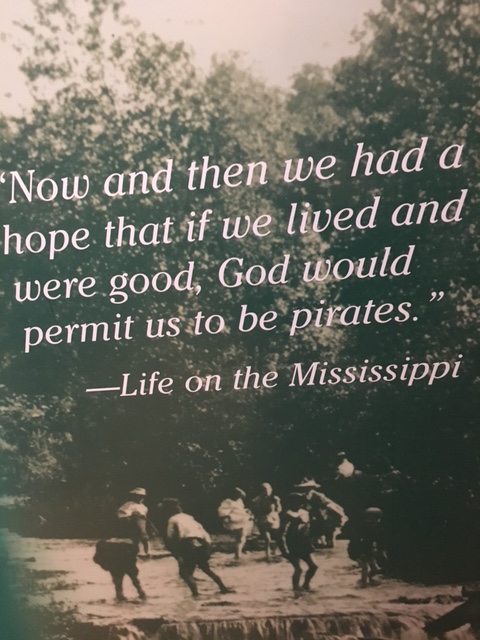