Saint Jude Thaddeus:  The Patron Saint of Lost Causes.  One of the apostles of Christ.   One of his first followers.  Later martyred.  His name Jude means giver of joy; his name Thaddeus means generous and kind.

“There is something so special about HERE” said our tour guide, Mary.  Patty had told us ages ago that when we made it to Memphis she wanted to go to St. Jude’s Children Hospital.  Today was the day.

Back in the 1960’s  Danny Thomas was a successful entertainer, and he and his wife Rosemarie began raising money to build a children’s hospital.  He had prayed to St. Jude for guidance in his life, and he had promised to make a shrine to St Jude if he received an answer.  He did receive an answer, and he did make a shrine.

Prior to the the tour we entered the hospital gift shop to wait for our guide.  As a rule we do not pass up gift shops.  That’s actually Rule #37 on Sixty Sixtah trips.  We also don’t pass Walgreens…more on that later.    We spent time in the New Mad Rid Museum Gift Shop yesterday, for example, and they basically only had civil war bullets and crocheted items and books written by people from New Mad Rid so that gives you a feel for how low our gift shop standards are.

Anyway, we shopped at the hospital gift shop and then joined our tour of St. Jude’s Children Hospital.  When they opened the hospital years ago the survival rate for childhood cancers was 20%.  There have been so many advancements in the field that now the survival rate in the U.S. is about 80%.  Remarkably, patients at St. Jude’s Childrens Hospital do not pay a dime for their care.  The families do not pay for housing or travel or treatment or food.  Little red wagons are often used for transporting the small patients around the campus.  We passed a man pushing a family member in a wheelchair, and he stopped to talk to our tour group.  “Are you guys visiting the hospital?” he asked.  “It’s a God-sent place to be.” 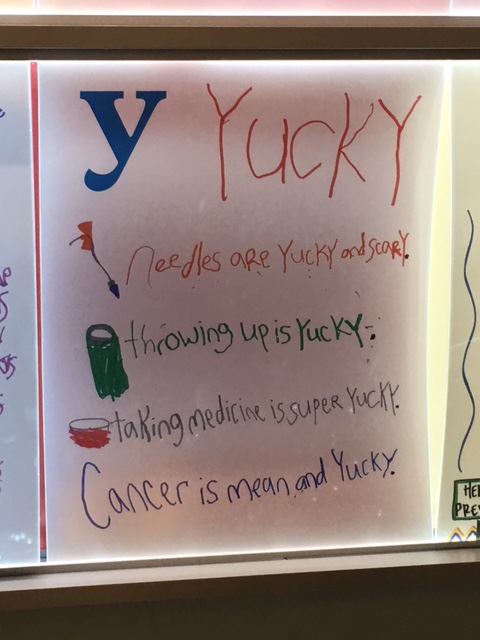 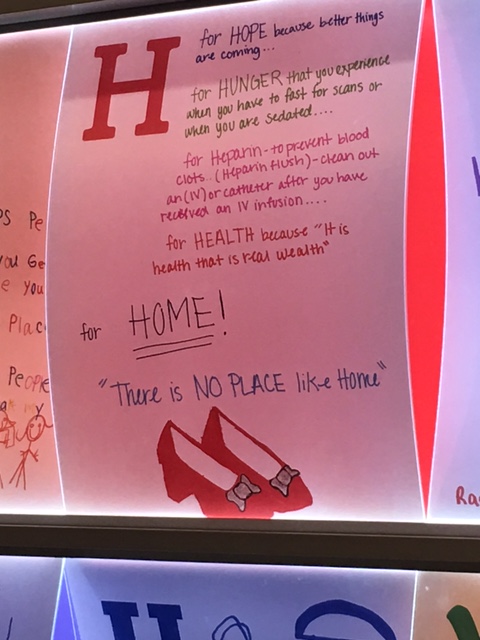 The hallways are bright and colorful and decorated with children’s art and murals.  We passed a young man who was sitting in a waiting room, and he told us he has been a patient at St. Judes for ten years.  He said the place is “just amazing.”  Suddenly there was loud movement behind us and we all moved to the side to allow a team to race down the wide hallway with a large hospital bed.  The bed held a young father.  In the father’s arms lay a young child of no more than two years of age who was terribly pale and sick.   A tiny child battling cancer.  A father holding him.  St. Jude hear our prayer.

Somehow we walked on.  The tour guide told us that folks are encouraged to rub the nose of Danny Thomas for luck at St. Judes.  Danny Thomas’s presence is felt throughout the campus.  His family remains involved with the facility after his death in 1991.  His shrine stands as a monument to his conviction that “No child should die in the dawn of his life.”  We rubbed his nose.

Back on the road in Sparky II we went.  Rule #86.  We do not pass a Walgreens.  It is a rare day when we don’t stop at a Walgreens at least twice.  If you take a look at the candy aisle in your local Walgreen you’ll understand why more fully.  Jane has a new tradition.  She buys me items from the candy aisle if I happen to stay in the car during a Walgreens run.  So far I’m the proud owner of halloween marshmallow peeps and as of today…Swedish Fish.  Life is good.  I also ponied up some cash of my own for tootsie rolls on one recent Walgreens stop and luckily no one else seems to be a big fan…  If anyone knows anyone important at Walgreens please let them know that they can become a corporate sponsor of our trip.  We have sponsor spots available at the Candy Level ($25-$50 sponsorships) and at the Chocolate Level ($50-and up).  Ellen?

Our next Memphis destination is the #2 tourist attraction in the state of Tennessee  behind the Smokie Mountains:  Yep, we were off to GRACELAND!

“Are we the first group of women to arrive all wearing Elvis wigs?” we asked at the ticket counter.   “Why, yes.  Yes you are,” said the woman as we thrust our phones in her hand so she could take our picture for us. 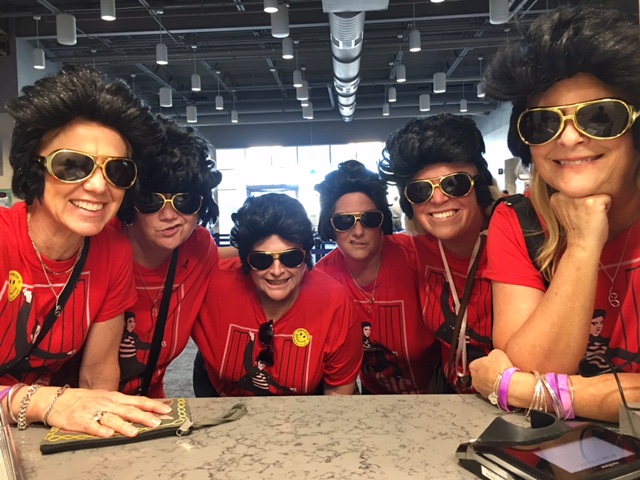 We have had our Elvis wigs for months in anticipation of this trip.  And our friend Jaime just gave us these EPIC sunglasses that have attached black sideburns (!!!!). We were living large as we strolled into the tourist destination.

We met Wanda at the theatre entrance and told her Patty’s story.  Wanda is a breast cancer survivor and had a little advice for Patty.  “Just keep getting back up,” she said.  Her Tennessee accent helped punctuate the importance of her words.

Graceland was the tour of his home which is a remarkable step back in time to the 1970s and shag carpet and large televisions and mirrored walls.

And sadly I have to report that something terrible happened at the ice-cream shoppe that we entered just as we were leaving Graceland.  Don’t worry, the ice-cream was delicious, but we were offered a Senior Discount.  This actually happened.   We have hit rock-bottom.  The world is a little colder.

And anytime you feel the pain,
Hey, Jude, refrain
Don’t carry the world upon your shoulders
For well you know that it’s a fool
Who plays it cool
By making his world a little colder

Some of us feel that the Smokie Mountains shouldn’t be the number one tourist attraction in Memphis; barbecued ribs should be.