“Act as if what you do makes a difference, because it does.”

This is a treasured picture of me (Julie) with Patty taken when we were both up in Orlando in January at my daughter’s dance competition.  Patty’s middle child, Julia, was on the same dance team years ago, and both have stayed in touch with our dance team through the years. 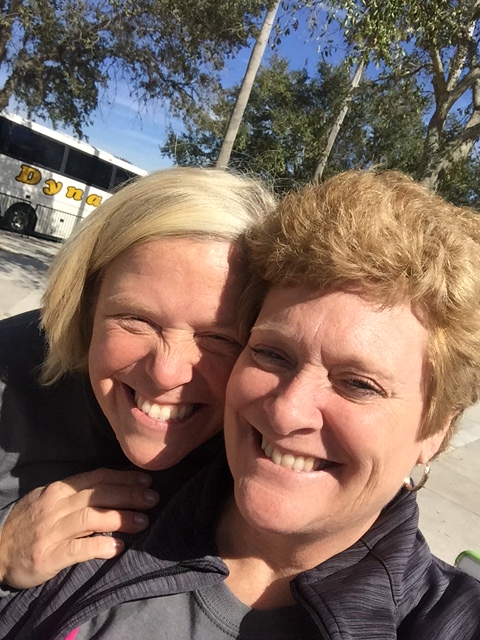 You may be wondering about Patty’s health battles since it’s not your average middle aged woman who dons a cape and armor and climbs on her horse to joust with Pancreatic Cancer.

“In a nutshell….I was diagnosed with breast cancer in March of 2008, just 4 months after my sister, Jane.

In March of 2009, I tried reconstructive surgery but got MRSA, and the implant had to be removed, and I went through 10 weeks of daily IV antibiotics. Then in October of 2012, I was told that I had pancreatic cancer and have been in and out of treatment since then to try and beat this disease. It’s been reoccurring. I’ve had surgery to remove most of my pancreas, removed my spleen along with over 40 rounds of chemo and radiation. Then in November of 2014, I had my thyroid removed because of thyroid cancer. Any questions? Well then…….let’s start living!”

Not sure about you, but…I had questions.  Sure did.  I met Patty when she had just been diagnosed.  The other gals have known her much longer.  I knew Patty’s sister, Jane, and had heard of Patty and believed that I was missing out not knowing her…but just hadn’t met her.  Then she was diagnosed.  We met.  I fell in love.  OF COURSE.  and here we are.  Turns out a lot of people have met her and have fallen in love with her.

She’s now over four and a half years into this battle with a mean old knight called pancreatic cancer coming at full gallop towards her.  Today, as I write, she is recovering from Tuesday’s dose of this biweekly  regimen.  Not feeling the best but watching tv at home like a champ with her dog Mick close by, no doubt.  Can’t eat anything cold because of neuropathy probs.  Trying to keep down calories.  Waiting for the calendar to roll to a day that is one of those good days.  Plenty of those to come.  She was three days out from her fifth dose of this medicine when we caught our flight to Chicago…and  had her “final” and sixth dose the day after we got back.  Her body continues to respond favorably to this medicine which is a funny way to say that her body feels terrible but happily, those cancer cells feel much worse!

After our Route 66 trip last summer and that “final” dose of that regimen she had SIX months with no chemo.  Six months.  Six months.

She resumed chemo this week for the first time in six months as scans and cancer marker levels confirmed that it was time.  So yes.  It’s time.  It’s time for more fun and more Sixtahs.  And more chemo.  And more life.  And more kindness.  And more Patty…